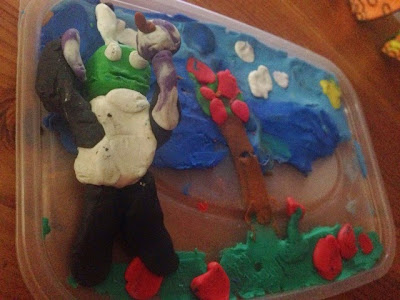 It's a rainy day, so me and my youngest sons are having a pyjama day!! While my husband is cooking a roast, yum!

The boys have been playing in their playhouse listening to the pattering rain, and now they are playing with plasticine. I used to love playing with it, and realised I still do!

Here are some of the boys creations! 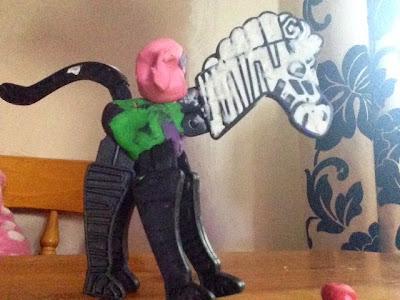 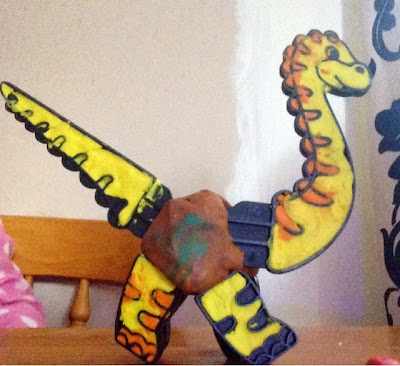 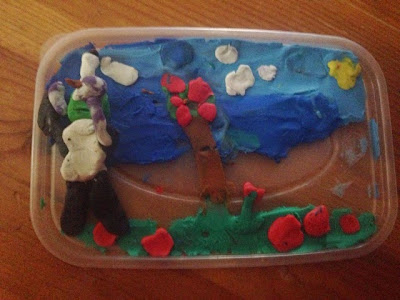 So last night we went to Bridport Carnival.  I think it was shorter than other years at  just an hour long.  It was started by the Wessex Military band, every time they started a song my kids jumped so that was quite a high point in my night he he!
The carnival was made up of the usual majorettes, and a small handle of floats, not as many as years before, I understand red tape has made it quite difficult that no one can be bothered.  Shame really. I'm slightly contemplating joinging next year, but what could we do?! 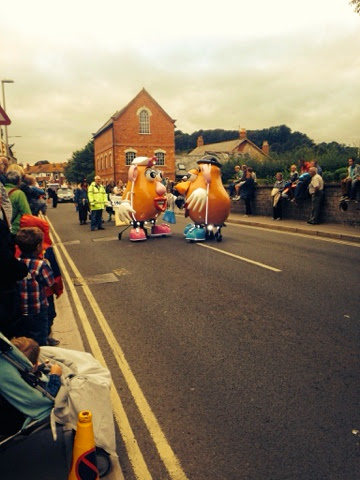 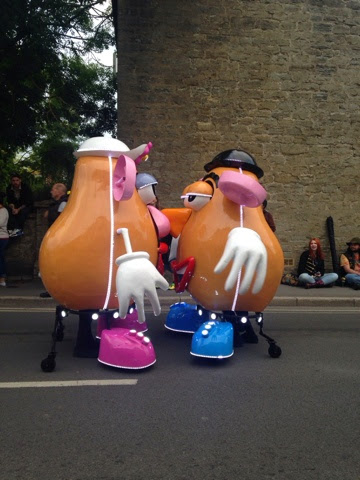 I thought Mr And Mrs Potato Head were rather effective.
Carnival night seems to bring the whole of Bridport into to town in good spirits, they have a band in a closed off street (South Street)  and a fairground in the coach station.  I got away with only spending £8 last night!
We finished the night, having a drink in a pub garden while the boys played with the toys they had  won at the fair.
Posted by Unknown at 09:03 No comments:

Last Day of my holiday

I have the end of holiday blues today :( I've had a relaxing week off, but back to the grindstone tomorrow.  I wonder how much work will be piled on my desk.  I am a legal assistant, the job is varied, interesting sometimes fairly stressful.
So I'm spending my last day in dorchester shopping I'm intending on buying some bits for my marine tank, couple of hermit crabs maybe a snail and a coral or two. The boys want to go to poundland.
It's a muggy day, wondering why we haven't had the air con re-gassed!
Posted by Unknown at 12:18 No comments:

Wow had a lovely couple of days with my family.
The plan had been to go camping in the New Forest, but the weather looked like it was going to be damp and depressing.  We decided as an extra special treat we would goto Legoland.  It was enjoyed by my boys so that is the main thing, last time we went one was new born, the other 2 years old and the eldest 10. We didn't get what we wanted out of the whole experiance.
It was super busy and queues were long but my boys still enjoyed it.  I was queuing  with my youngest son Oscar (5) for the Lego driving school so he could get his licence. He was stood there saying:
Him:"so I get I real Lego driving license?"
Me: "yes, that's cool isn't it!"
Him: "so I can drive on real roads?"
Me: "the real Lego roads with cars on"
Him: "so how do I get the car home?"
Bless he thought that he could keep the Lego car to take home to drive on Lego roads. 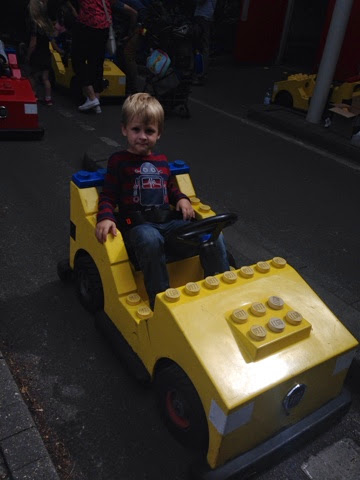 There he is in his wheels, he told me he was going to drive like daddy around the track.
Meanwhile my other son was at the young drivers school for the older kids (6-13 years). My eldest son took him to queue for that and found it quite hilarious with Samuels driving habits. He got road rage with a girl driver because she drove too slow and kept stopping and starting :) 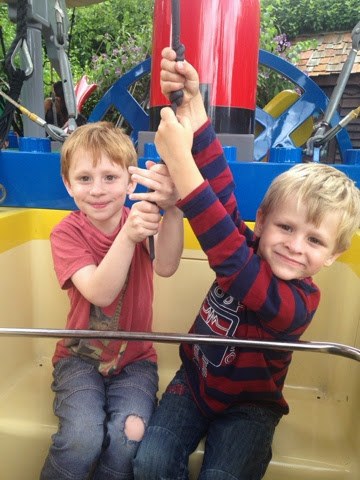 There's my youngest two, making us go up and away in the ride we queued for about an hour to get on! I wouldn't have minded but 1. Anyone with Q-bot (a queuing device) would go straight in the ride before anyone in the queue.  It's a good idea, however the price to get into Legoland is pretty damn steep and to add £15 per person to get on a ride first is just not doable for a lot of families. 2. Once on the ride we went around 1 1/2 times after and HOUR in the queue!
The food and drink is pricey in the park, my 3 boys had an ice cream in a cone, it came to £8. I bought the same at the beach the otherday and it came to £3.50.  Why the need to fleece money out of families, it can be done cheaper.
The money aspect of Legoland is what really gets to me, but all theme parks are the same, if anyone knows any different do let me know.  Apart from that it's an amazing place.
The miniature land was brilliant small scale models of different countries and land marks and Lego vehicles just casually trundling about! 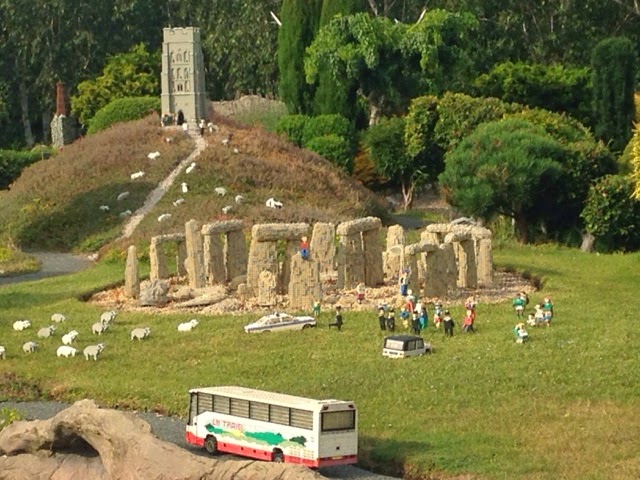 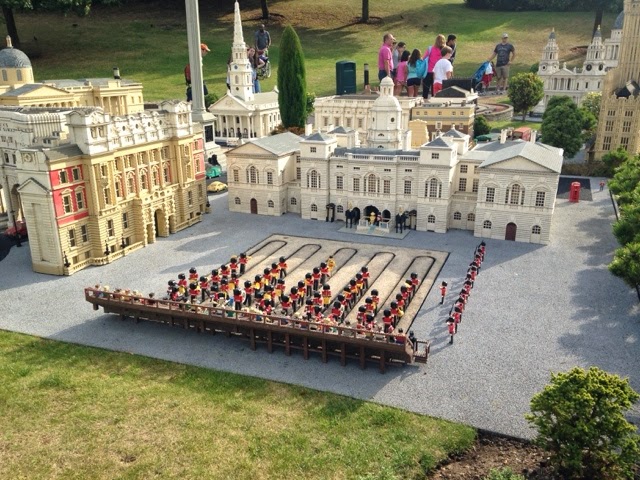 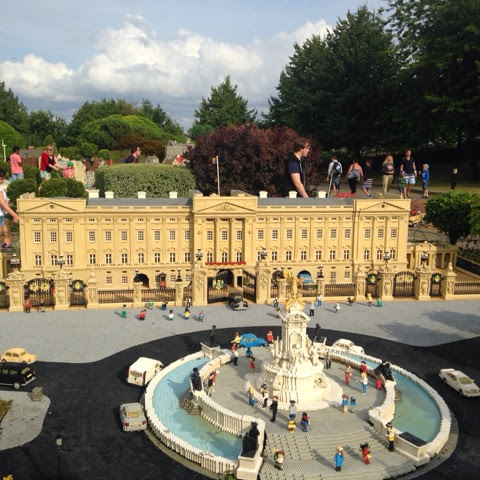 As you can see truly amazing. I would love to make the models there.
I can't remember the name but there is a room with loads of Lego in you can build and get creative with, so many vibrant colours and shapes here are our creations. 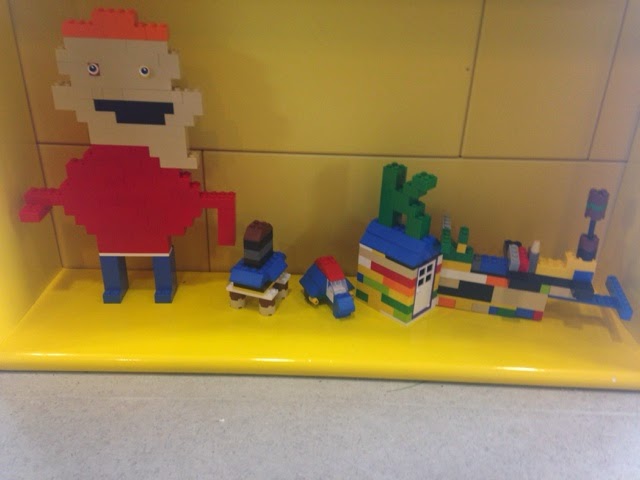 To our joy we found out the park closed at 7pm! Nearer the end of the day the queues are less must remember for next time. So we all manage to go on the Viking ride, being splashed with water and squirted by water guns for the public to squirt we were thoroughly cooled down. 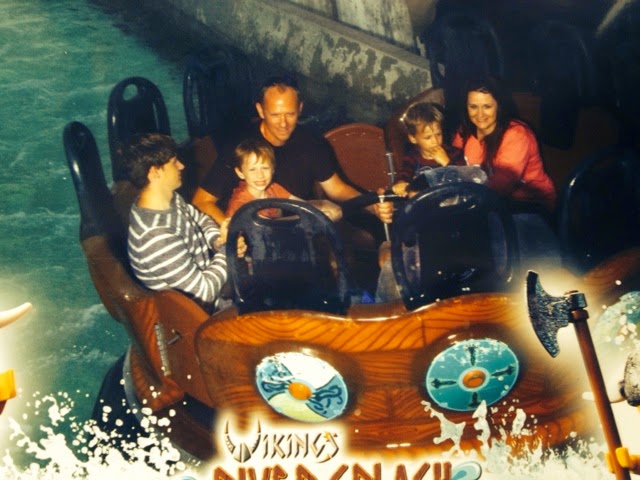 We started the walk back to the exit about 6:45pm and can you believe it there was a queue to get in the shop, it was craziness, every man for themselves.  Soooo packed with people and fantastic Lego sets and merchandise. Now I've whinged on about money and prices etc. but I was relieved to see that they had little  poly bags with a little model to build for just £2.99. My boys got a Lego set and one of these. My eldest got Lego men ice cube tray and a Lego spiderman key ring. The shop was packed but the checkout was moving rapidly.
I think the youngest of my tribe thought we were going to stay in the Legoland Resort, I wish it looks amazing. He kept asking when we were going to the hotel
We were staying at the fairly close by Crowned Plaza at Heathrow, it was a very pleasant stay including parking and breakfast.
The room was cosy and pretty sure sound proof, we had a room for 5, two double beds and a single. Staying in a hotel is a real novelty for my boys as we don't do it very often.  They later told me they want to live there for ever.
They do an immense breakfast.  Full English breakfast, pastries, fruit, yogurt cold meats and cheese, cereal and I'm sure there were other yummy foods. My boys were fed like kings!
Overall we had a lovely couple of days, popped to Windsor and walked along the Thames,  had a peek and a pint outside Windsor Castle then the 2 hour drive back home.
We booked our break with Bargain Family Breaks, link below.
http://www.budgetfamilybreaks.co.uk
Posted by Unknown at 15:52 No comments:

So today my youngest two are with their nanny and granddad, my eldest hanging out with his girlfriend ;)

I made the most out of my day so far playing with my fish tank!

I have a mini marine tank a TMC 15 litre tank to be precise, my own little slice of the sea, I have some corals, a hermit crab and an emerald crab and some sexy shrimp.  Before anyone thinks I'm a little odd having a thing for shrimps, they are actually called sexy shrimp.  They shake their little butts around like nobodies business so presuming that's how they got the name.

We also have a larger tank with beautiful corals and fish, in the process of moving the contents into a an even bigger tank.  This will mean more space = more space for more coral and fish - happy days!

Well I thought I would start to write a blog, as many people do.

I have been lucky enough to visit lots of concerts, get great deals on holidays and just thought people may like me to share.

I am hoping to write reviews on concerts and other events I attend, post interesting offers that can help save money and may even chuck in some recipes...who knows lets just see!!